India’s automobile sector might be having a hard time, particularly in the last few months, but the potential for future growth is luring one automobile major after another from neighbouring China.

The latest is the impending entry of China’s largest SUV maker Great Wall Motors, which has already registered an India unit and is currently scouting multiple locations for its manufacturing facility.

According to sources from the Industries Ministry, the company has already registered an India entity called Haval Motor India with an office in Gurgaon earlier this year.

Haval is the brand under which the company sells a large number of its SUVs and sources say that it might enter the domestic market with its highly popular models — the Haval H2, Haval H6 and the Haval H9.

Great Wall is not the first large automobile player to have set its sights on India over the past few years. SAIC Motor, one of Great Wall’s primary rivals in China, also entered the market only last year with the launch of its MG Motor brand.

In fact, both firms are currently scouting for a manufacturing facility, with reports stating that one of these facilities is US auto-maker General Motors’ last remaining factory in India at Talegaon, Maharashtra.

General Motors, which announced its exit from India a few years ago and has started hiving off its manufacturing assets.

The US automaker had sold its Gujarat plant at Halol to SAIC in 2017, and the facility has been used by the latter to produce one of the only models in India’s passenger vehicle segment which has recorded substantial sales growth over the past few quarters: MG Motor’s SUV Hector.

Great Wall, however, is not limiting its location scouting to only Talegaon. Sources say that over the past few months, teams from the company have scouted a wide range of locations across several other states including Gujarat, Karnataka, Andhra Pradesh and Tamil Nadu. It is also looking at acquiring land owned by Chinese truck maker Foton in Chakan, Maharashtra.

The entry of Chinese players into the flagging Indian automobile sector could inject some new overseas competition and also offer the new entrants a potentially large market at a time when the Chinese auto market has reached near saturation.

The influx of new automobile majors from China are also set to boost foreign direct investment flows into the sector, which has been relatively stagnant over the past few financial years.

SAIC Motor, one of Great Wall’s primary rivals in China, also entered the market only last year with the launch of its MG Motor brand. They are now scouting for land to set up their manufacturing base in the country 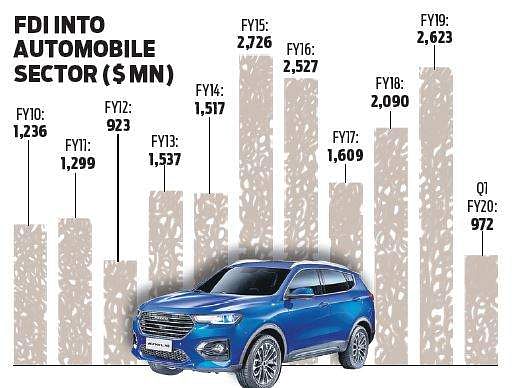 Politics, pornography and Pakistan: How the three Ps are interlinking in India’s WhatsApp groups

Bank of Baroda back in black with Rs 710 crore profit