RBI refuses to blink, decides it will wait till April 3 before deciding on rate cut

The RBI on Monday decided to wait it out a bit longer before cutting its repo rate currently set at 5.15%.

The move is a significant departure from the approach adopted by other global central banks that have been announcing emergency rate cuts to contain financial market volatility amid fresh challenges coming from the deadly coronavirus. 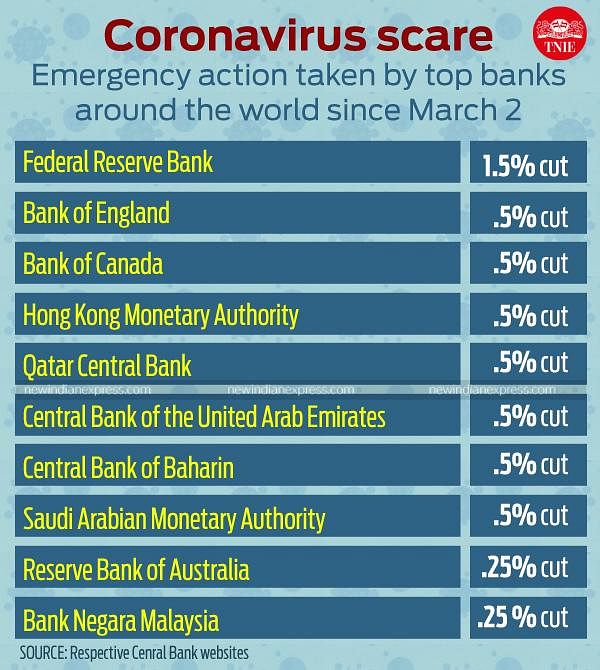 Governor Shaktikanta Das said the government was fighting the pandemic on a war footing, yet he believes the timing is inappropriate. The rate cut call, he said, will be taken by the six-member Monetary Policy Committee on April 3.

For now, as part of his calibrated measures, RBI will conduct another US dollar sell-buy swap on March 23 besides undertaking long-term repo operations to inject liquidity into the system.

As per initial estimates, global growth is likely to be affected by 0.4-1.5 per cent due to the coronavirus. Stating that India wasn’t immune to the pandemic, Das said, RBI will have a clearer view of the impact by its next monetary policy review.

Though speculation was intense about an impending rate cut, markets appeared to have sensed otherwise and remained unenthused with the Sensex shedding a record 2,713 points while the Nifty closed at 9,199 on Monday.

The only comforting factor is, for once, all economies developed and developing and underdeveloped, are sailing in the same boat, with coronavirus pressing global central banks into collective action.

We now know the method through which the virus affects countries (taking human lives, and causing irreparable demand and supply shocks), but it has no specific purpose. Governments are suspended between grief and recovery, so central banks, who are often blamed for delayed monetary stimulus, are launching a forward march lowering the cost of money to cushion the anticipated economic blow.

On Sunday, the US Federal Reserve Board arrived in silence, slashing rates by 1 per cent to practically zero besides a massive $700 billion quantitative easing programme. This is the second out-of-turn rate cut in the US since last week. It also gave a $1.5 trillion credit boost, which somewhat soothed markets. But despite Sunday’s cut, US futures indices were all trading in the red.

In fact, global central banks are all singing from the same song sheet. For instance, 19 others including Bank of Canada and Bank of Korea have cut rates fearing the coronavirus impact to be worse on their economies. Moreover, 17 other central banks are meeting within this week and are highly likely to reduce rates.

But whether they’ll succeed in putting the virus out on a limb remains to be seen.

There is no bigger decision than Kashmir: PM Modi on the way forward for India