The World Bank cut India’s economic growth forecast by the most among South Asian nations on Sunday, below the outlook pegged by the nation’s central bank for this year, mainly because of a deceleration in domestic demand.

India’s gross domestic product growth is projected at 6% in the fiscal year started on April 1, compared with 7.5% forecast in April and 6.8% recorded a year earlier, the bank said in its latest South Asia Economic Focus report. Growth is expected to gradually recover to 6.9% in 2020-21 and to 7.2% in the following year, it said. 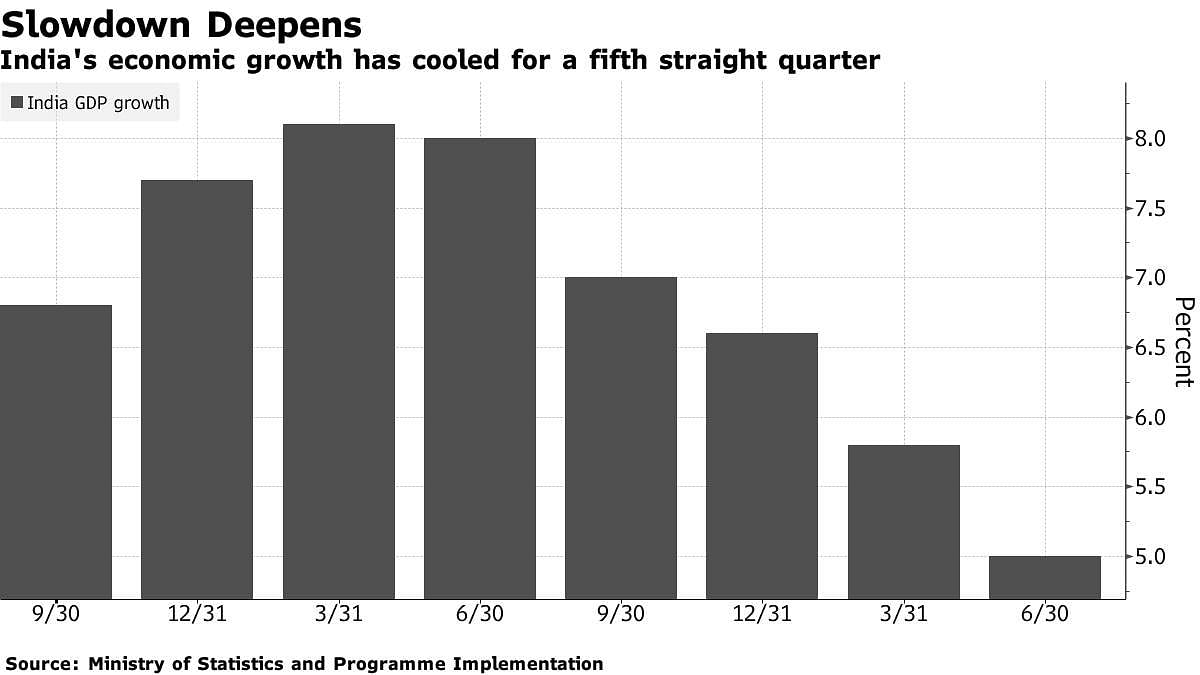 “India’s cyclical slowdown is severe,” the report said. The weakness is mostly due to a deceleration in local demand, according to the bank. “In such a weak economic environment, structural issues surface and the weak financial sector is becoming a drag on growth.”

Earlier this month, the Reserve Bank of India downgraded its economic growth projection by the biggest cut in its forecast in at least five years to 6.1% this year. GDP growth cooled for a fifth straight quarter to 5% in the three months ended June, at the slowest pace since March 2013.

The critical situation demands decisive policy actions, and initial government steps point in the right direction, with the RBI embarking on an easing cycle and the government announcing a stimulus package recently, the World Bank report said. “All these measures will help to contain the downturn, but also raise concerns about fiscal space.”

“The main policy challenge is to address the sources of softening private consumption and the structural factors behind weak investment,” according to the report.

The main sources of risk include external shocks that result in tighter global financing conditions, and new defaults by non-banking financial companies triggering a fresh round of financial sector stress, the report said. To mitigate these risks, the authorities will need to ensure that there is adequate liquidity in the financial system, while strengthening the regulatory framework for NBFCs, it said.

The World Bank expects the South Asian economy to grow at 5.9% this year, lower by 1.1 percentage points from its April estimates. It also cut growth forecasts for Sri Lanka, Maldives and Bhutan, while raising those for Nepal and Bangladesh.

Act against terrorists; further terror attack on India will be extremely problematic: US to Pakistan

With acche din nowhere in sight, who does a moderate vote for this election?

The common goal of Mahagathbandhan is defence of democracy